This edition of And That Was… was almost forgotten, such was the nature of April 2022. With March a hectic month, there was a feeling April would be quieter, but the reality was anything but relaxed. Months fly by these days, a combination of busy schedules and the constantly evolving Covid situation. April kicked off with a whirlwind trip to Tāmaki Makaurau for Ghostcat’s collaborative The Main Line exhibition at Limn Gallery, and as you might expect, a range of other adventures and encounters. On the home front, we have been launching a few new initiatives that will all become a bit clearer over the coming weeks… In the meantime, here are a few of the highlights from April!

We boarded a flight to Auckland on the 7th of April for the opening of The Main Line, a show featuring 28 custom-built miniature trains, produced by Christchurch’s own Ghostcat, each decorated by a graffiti artist paying homage to the iconic Spacerunner carriage (artists included Dyle 52, Askew, Phat1, Berst, Morpork, Lurq, Ikarus, Dcypher, Yikes, Freak, Vents and more). The opening was packed with names from the Aotearoa graffiti scene, reminiscing over a beloved part of the local culture’s history, making for an auspicious occasion. 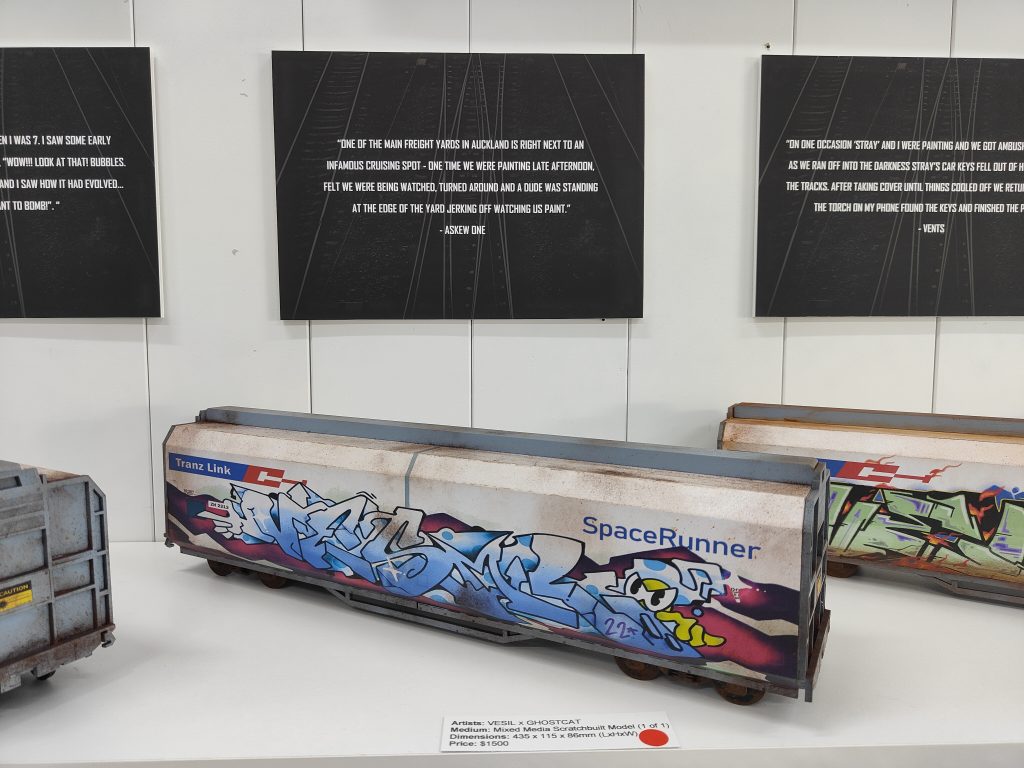 With The Main Line opening on a Friday night, the rest of the weekend was left for exploring and the chance to navigate Aotearoa’s biggest urban centre. From the Mercury Plaza to legal walls in Avondale and many spaces in between, it was a treat to stumble upon works by some real heavy hitters and discover some new forces as well. A personal highlight was stencil don Component’s beautiful ballerina in Ponsonby… 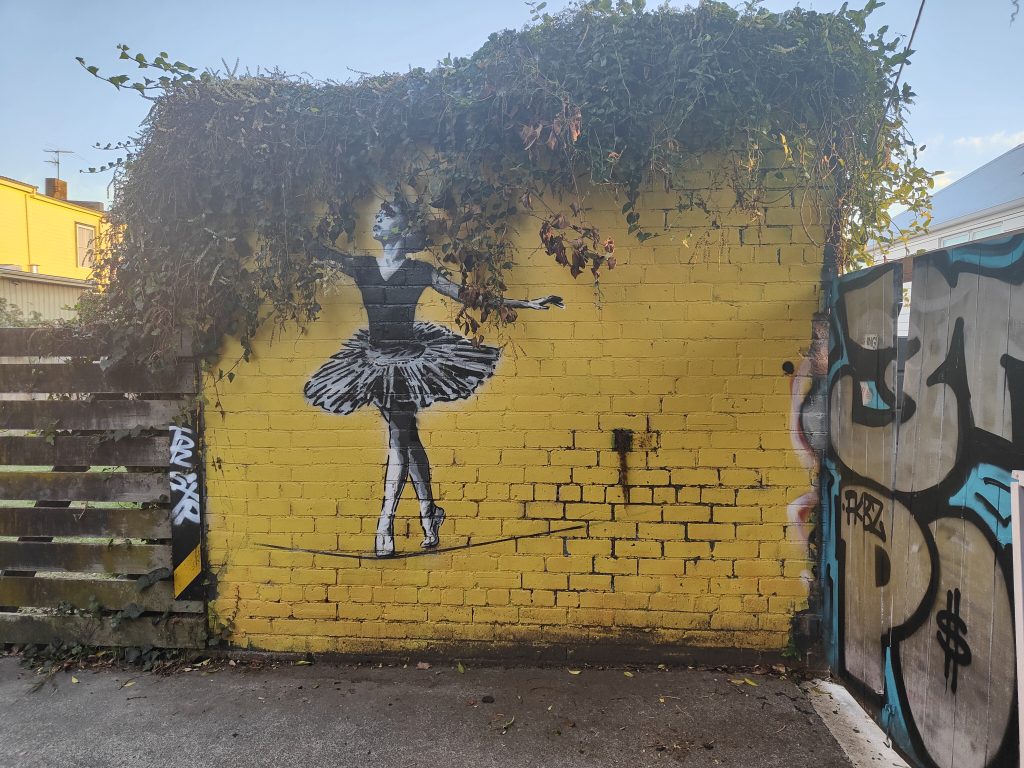 Race A2D at The Avondale Pavilion

Another highlight of the trip to Auckland was the chance to catch Race A2D painting at Te Tūtahi Auaha – The Avondale Pavilion – the process documented by the man himself Dr Berst. The Pavilion is a fantastic concept that has become a key tool in the documentation of Aotearoa’s urban art culture. I might even appear in the background of the YouTube video a few times!

The Slap City collective keep finding amazing spots and this empty billboard is a personal favourite – it might not be as central as some of their other locations, but it has an undeniable charm, echoed in Vez’s sppon drawer and played on by teethlikescrewdriver’s massive pencil. 10/10 would visit again. 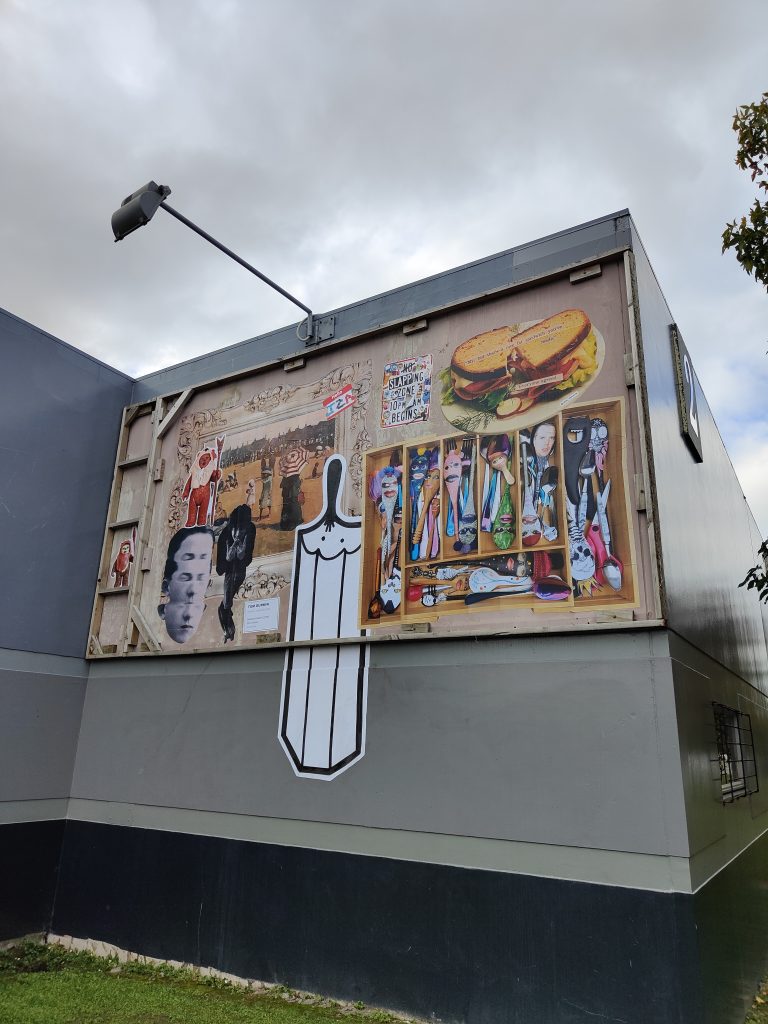 Jacob Yikes’ Even in Darkness exhibition was an April highlight in itself, a bold body of work that was candid and honest while still mysterious and evocative, but the chance to sit down and discuss the process with the artist with an enthusiastic live audience at Fiksate was a perfect way to end the month. The lengthy talk was an honest insight into the artist’s practice and the influences found in Even in Darkness. 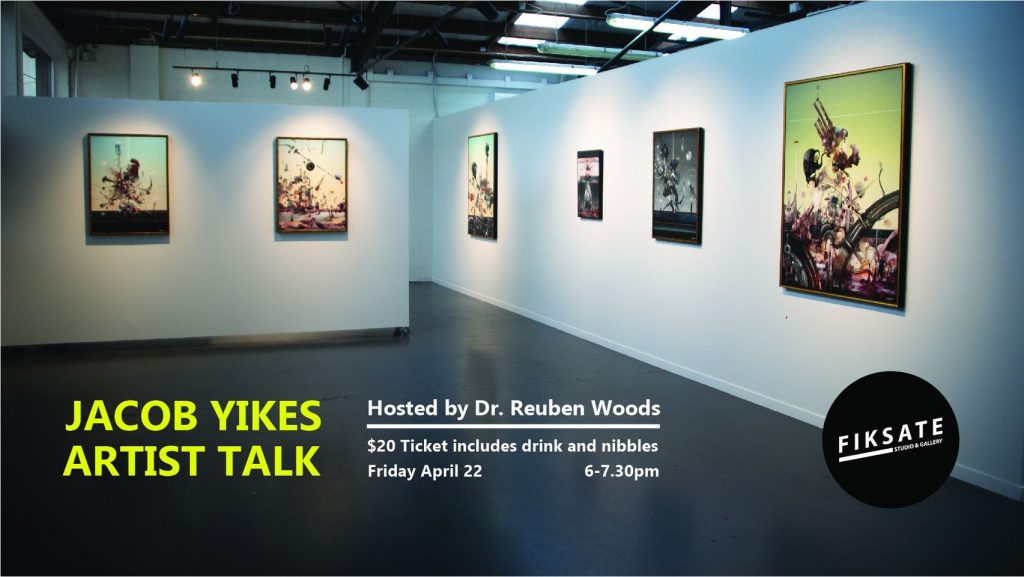 What made your list for April?Let us know in the comments… And if you have any events coming up, let us know by emailing hello@watchthisspace.org.nz

Tāmaki Makaurau Auckland is a strange beast. It is the only mega-city in Aotearoa,  and when you touch down from Ōtautahi it is hard to comprehend the sheer spread of the northern metropolis. While you can easily navigate Christchurch’s inner city in 15 minutes, Auckland’s urban centre seemingly sprawls on forever, with each area displaying a distinct identity. Our quick trip to Tāmaki meant we didn’t get to endlessly explore the diversity of the city, but we did get to see a fair bit of art. Of course, there is no chance we could have achieved a full coverage of the city, but what we saw, we loved. Auckland has the longest and largest history of Aotearoa graffiti and street art, so spotting a legendary figure’s name or character, whether fresh or faded, is always a possibility, but still exciting for a nerd like me, while you can always find a new name that is on the come up as well. It also has a truly urban feel, where you can get lost down alleyways, led by the trace of some preceding presence who was compelled to leave their mark. It is a real city, and it’s streets are always talking…

Where should our next postcard cover? Let us know at hello@watchthisspace.org.nz