In this issue of Tune! artist and designer Kophie Su’a-Hulsbosch shares the music that matters to her. For the founder of Future Apparel and member of the Conscious Club, music is a vital component of her creative process, with hip hop a driving force in her thinking and making. From shooting and editing music videos with her partner Local Elements, to designing posters and album covers for local and international acts, Kophie’s art is deeply entwined with music, while her love of hip hop also reflects her social activism…

My name is Kophie and I am a freelancer artist/designer among other things. I have been drawing since I was young, and growing up in Wanaka, I was influenced by the skate and snow culture. Moving to Christchurch at the age of 10, I went from a small country town to an urban environment, I became obsessed with graffiti and it’s been a journey ever since. I used to love walking around the city and the tracks before the earthquakes, looking at all the newest pieces. Then the explosion of graffiti post-earthquake was cool to witness. My style is primarily influenced by hip hop (including graffiti), politics, street subcultures and lowbrow art. I have had a lot of art stolen, so I think I make art for broke people like me!

Music certainly influences my work, I listen to many genres but my primary influence is hip hop. Nothing touches my soul like hip hop, especially the power that lyrics can have. There are so many sub-genres within hip hop which I think is evident in the songs I have chosen, but I absolutely hate trap! I listen to most of these songs while I am working or creating depending on my mood or what tasks I have…

I love UK hip hop and the movement over there is HUGE. I have been lucky to design single cover art with some big names in UK hip hop through an awesome producer over there called Planky. My favourite UK record label is High Focus, they are releasing the best artists. These two songs are artists from High Focus.

The Verbz & Mr Slipz track is my new favourite tune, and the Ocean Wisdom song is an old fave, it a track that is a bit more real and emotional.

Tom Scott from Homebrew is probably my fave musician of all time and I have been listening to his music since high school so its had a massive influence on my life, he tends to talk about real-life New Zealand problems and politics. This album is a newer collab with Choicevaughan, a New Zealand producer featuring many other local musicians. It’s a pretty upbeat album and I listen to this on the weekly. My other favourite song from Tom Scott is Home, which gives me goosebumps or makes me cry every time I listen to it!

Eno x Dirty is real representation of New Zealand hip hop and I love the incorporation of Te Reo in the lyrics. I especially love the track GETURSELF2GETHA talking on all the bullshit conspiracies going around and the rise of fake news, the decline of critical thinking and the increasing division on social media.

I love Don’t Sleep Records and I listen to this mix of boom bap and jazz hip hop all the time while I am working. It was recommended to me by my good friend Lucia. The samples used throughout this mix are about not sleeping, which I strongly relate to!

This one is a classic! It was released in 2007, but I love Mos Def/Yasiin Bey so much and his verse gives me goosebumps. I could listen to this song all day! I put this on when I want to be inspired…

This is my favourite lo-fi radio to put on when I really need to concentrate or do a lot or writing or research.

I have to slip in this upbeat track by my partner Local Elements – it is some awesome Christchurch hip hop!

Check out the other issues of Tune! to build an ongoing playlist! 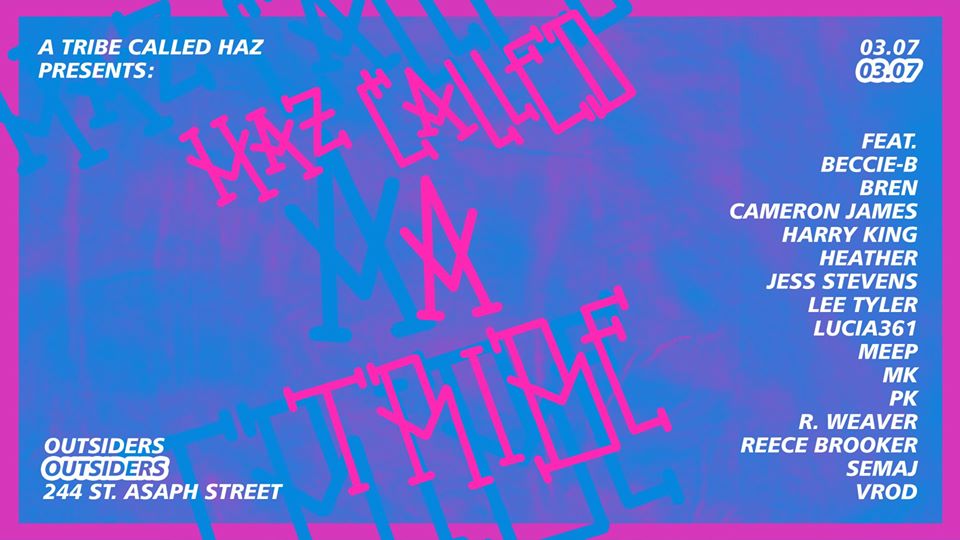 This Friday, the 3rd of July, A Tribe Called Haz has pulled together a group of talented young artists for a group show at Outsiders skate shop. Haz Called a Tribe features 17 artists, spanning a wide range of styles, with backgrounds in graffiti, design and other creative avenues ensuring the show serves as a snapshot of an emerging creative community in Ōtautahi, one born of myriad influences, including the increasingly diverse forms of street culture.

Coming out of the creative output of the Covid-19 lockdown, A Tribe Called Haz saw the work his friends were producing and knew it was time to bring everyone together for an exhibition. While not explicitly themed, he believes the collective will ultimately feel cohesive, a result of the sense of community in the group he has collected.

While a number of names are familiar, many are also newer faces, who despite a long history of making art have previously avoided such a platform. A Tribe Called Haz is also excited about the diversity of the show, ranging from traditional graffiti to abstraction, with many artists producing work that might be unexpected given their backgrounds.

Haz Called a Tribe is one-night-only pop-up exhibition at Outsiders, 244 St Asaph Street, from 6pm. DJ Liam K. Swiggs will be playing and Outsiders will be open throughout the show as well. For more information, head to to the Facebook event page…