June, smack bang the middle of the year. We can see the path to spring and summer in front of us (OK, that might be optimistic, but from a strictly numerical point of view…). But the midst of winter does not mean there was nothing on – sure, the weather is a little bit more unpredictable and the mornings colder, but the tricks and treats keep coming. The last month has seen some interesting propositions and amazing opportunities, the chance to connect with a wide range of people and, of course, some awesome art…

As you may know, Watch This Space is developing The Little Street Art Festival, a street art event with a different spin – spotlighting the smaller scale and great diversity of urban art across Ōtautahi. From small-scale paintings and stencils, to sculptural installations, craftivism and light-based work, the festival will provide a unique platform for local and Aotearoa urban creatives. But, to bring the Little Street Art Festival to life, it requires money! We undertook a Boost Ōtautahi fundraiser through June – and thanks to the generosity of our friends, whanau and networks, we raised $15,000! This is a fantastic building block for the festival – we are super excited! 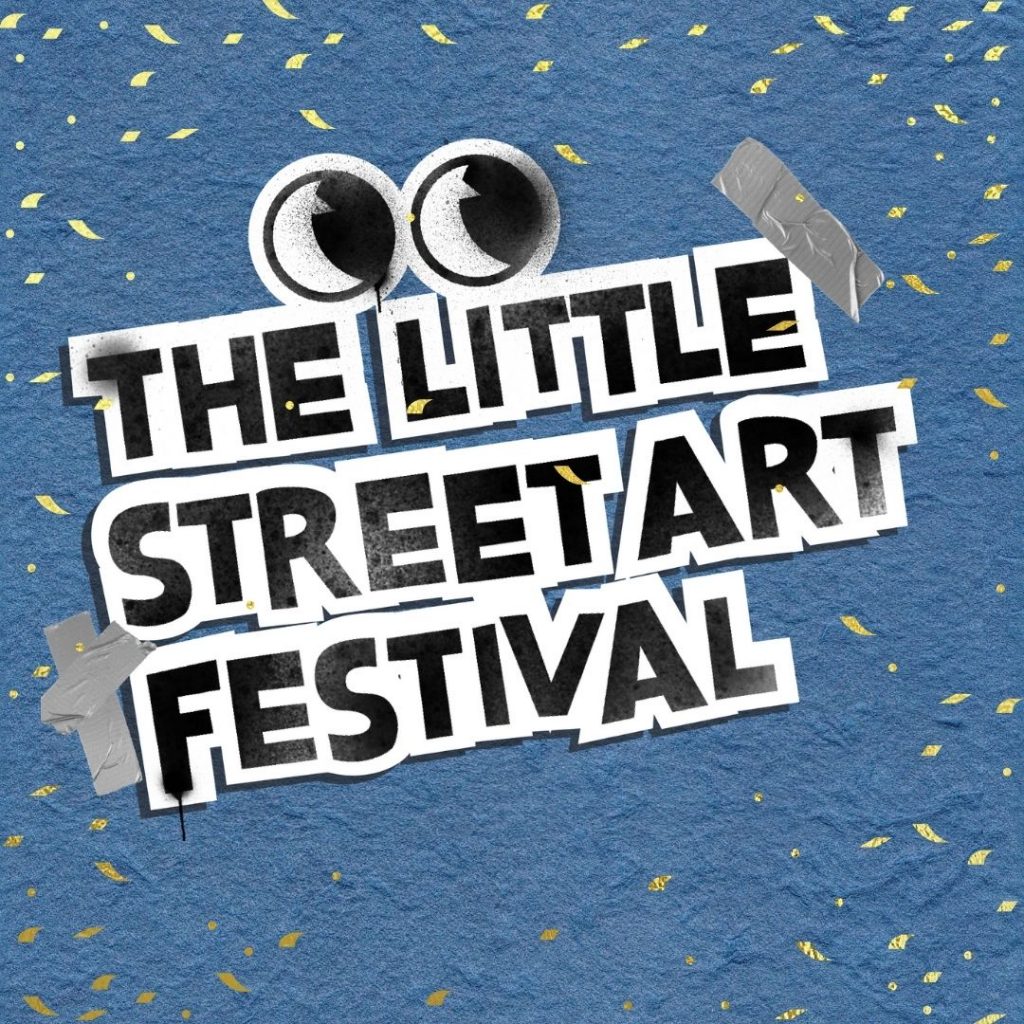 We have loved spotting JZA’s sneaky street sign alterations around the city. Bringing a smile to people’s faces, declarations such as ONE LOVE, ONE EARTH and more show how little interventions can provide meaningful impacts to our daily experiences. 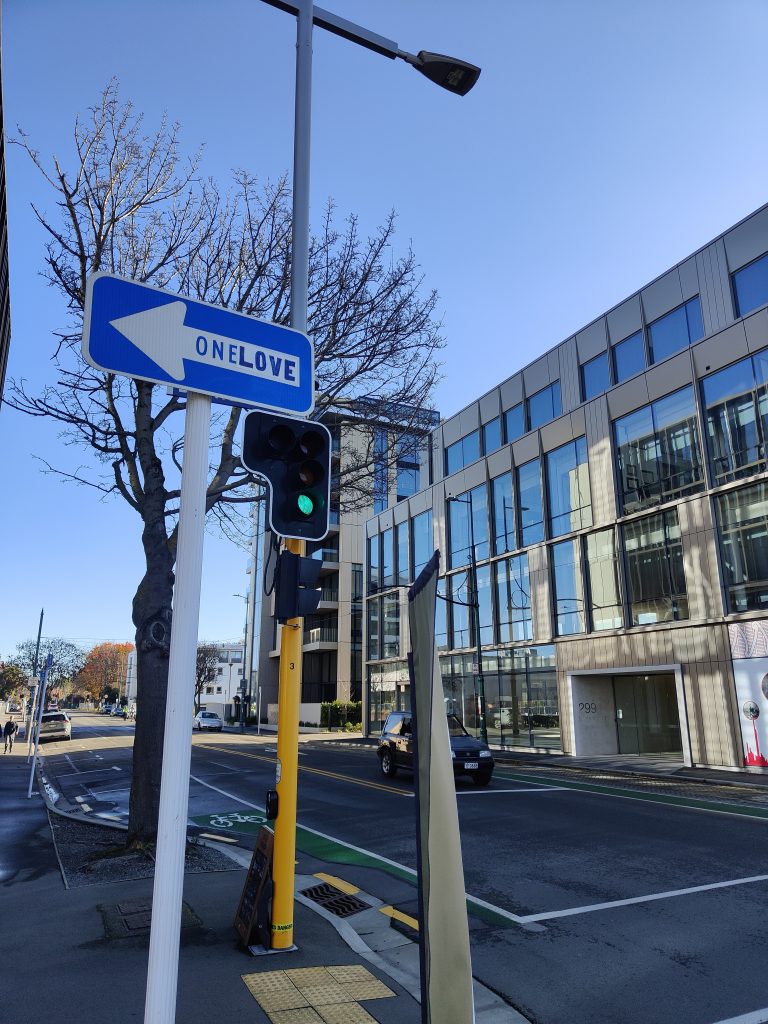 A Quick Trip to Akaroa

I was also lucky enough to have the chance for a nice drive to Akaroa, where I presented a talk about the complexities of urban art to an enthusiastic crowd in an amazing venue, the picturesque St Pauls Church. The chance to field questions and share my passion for graffiti, street art and neo muralism with an audience keen to engage was a pleasure and ultimately stimulating. It’s funny the places you can find yourself… 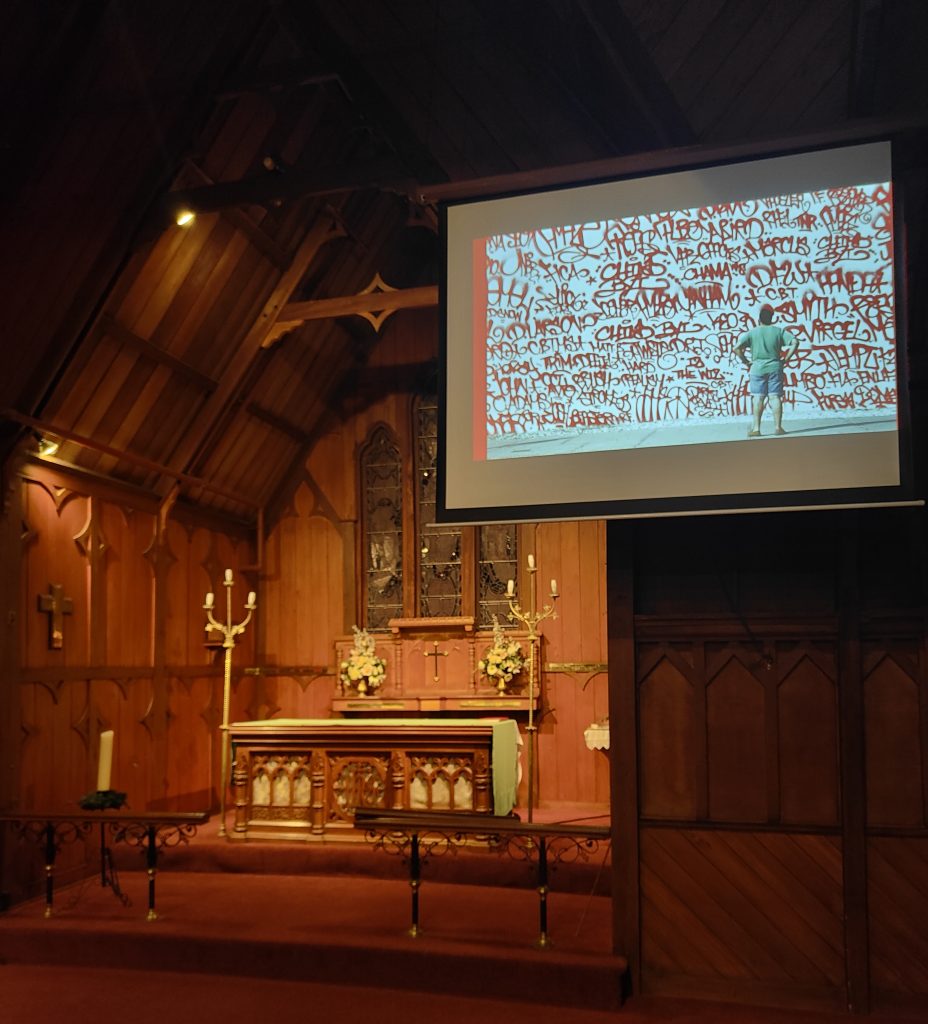 To add to the list of unexpected happenings in June, I was also lucky enough to meet up with Steve Jacobs and cross live to Studio 10 in Australia as the roving reporter toured the South Island. Over a lightning quick tour of some of the street art around Little High, we chatted about why urban art has been so important for the city… 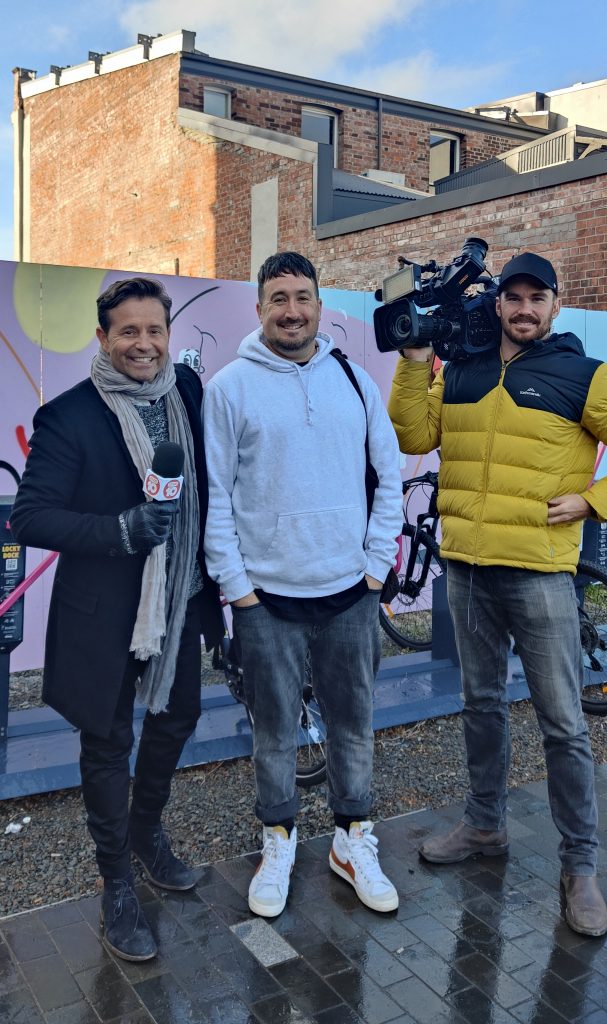 It was great to finally see a new solo show from Josh Bradshaw, whose new creative direction is a far cry from his previous identity – refreshingly urban, punky and monochromatic, I’m onboard (and have been for a while). His show at Absolution was a perfect tonic for a cold winter evening, beers and chats in an intimate environment with fresh art to explore. Perfect. 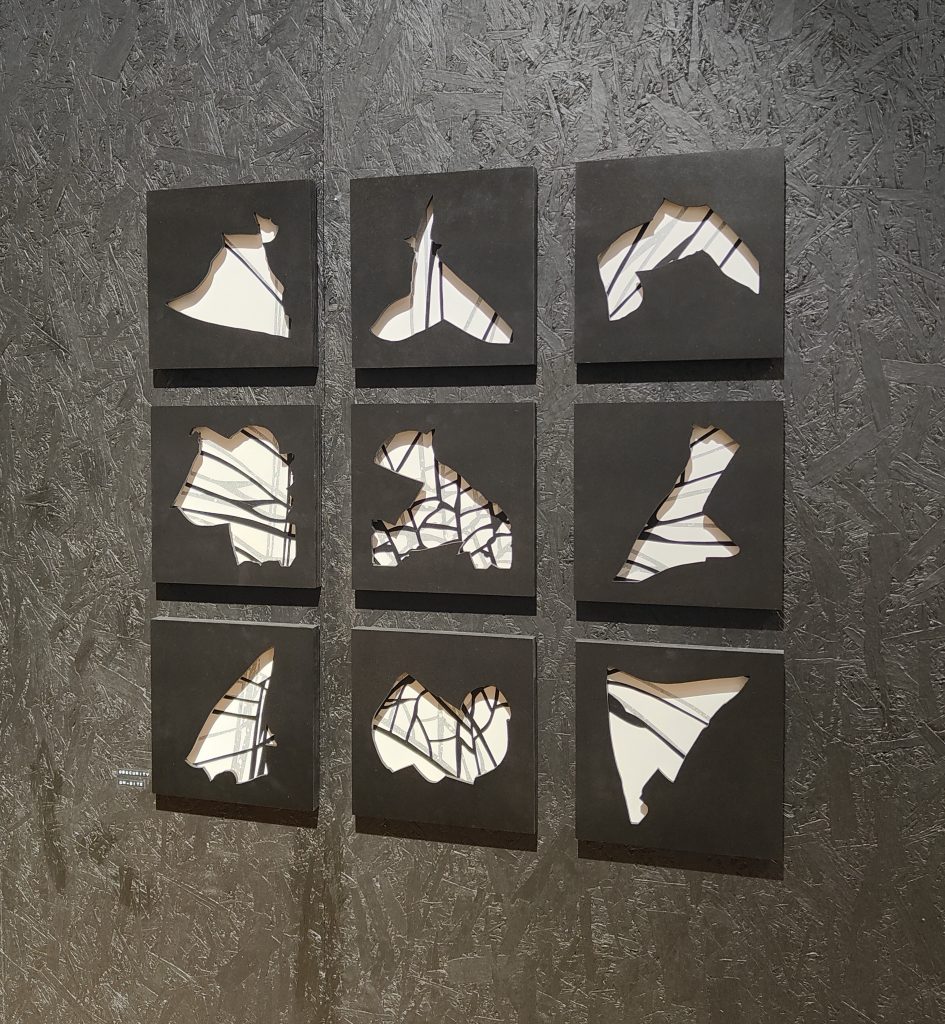 What made your list for June 2022? let us know in the comments!

Shadow Town, an exhibition of the work of local artist Ghostcat, opened at Fiksate Gallery on Friday 9th April, marking the gallery’s first show at their new Sydenham premises. There was excitement surrounding the show, with print and radio interviews and a flow of social media posts drumming up interest in the artist’s miniature creations. Ghostcat’s first exhibition, as the opening date approached the artist confided that he really didn’t know what to expect, but in his endearingly enthusiastic style, he was keenly enjoying the journey.

Ultimately he had nothing to worry about. That nervous period when doors open and nervous doubts that anyone will show up creep up never had the chance to ferment. Almost immediately the Hawdon Street gallery was buzzing with an excited audience. In the smaller gallery the works were spread across shelves on the walls and a network of plinths, making use of the available space to accommodate the impressive number of creations (Ghostcat produced more than 40 miniature builds for Shadow Town). The plinths and shelving created the effect of a gridded network of urban blocks for viewers to navigate and provided multiple vantage points. A large roller door opens the Fiksate space onto the street, further connecting the show to the pervasive influence of Christchurch’s urban environment, explicitly in the case of the miniature replica wall placed in full view of its real-world inspiration just outside. The miniature version re-imagined with a mural by Dr Suits in a suggestive ‘will-it-to-life’ strategy.

Other references may not have been as physically close, but were no less recognisable. As people leaned in to inspect the intricate and loving details on Lyttelton icons the Volcano and Lava Bar (with a tribute to the late Bill Hammond inside), the façade of The Ministry nightclub (including flashing ‘M’ neon sign), the ‘Stairs to Nowhere’ from the Hereford Street carpark (each step painstakingly cracked), The Staveley Market (surely a highlight, the status of corner dairies in Aotearoa childhoods may not be as strong in 2021 but for those of a certain age, we all had a local dairy for $1 mixtures and single cigarettes) and the Berlin Wall segment painted by Jessie Rawcliffe, sparks of memory and recognition flickered. That attachment to the real and lived is central to the success of Ghostcat’s work, a necessary addition to the intricate details. People sharing stories and admissions was a constant chatter amongst the bustling crowd.

Alongside the memories and associations of experience and place, Shadow Town also revels in healthy doses of humour and collaboration. Watching people scan the dirty toilet stall, replete with over-flowing bowl and obscenely graffiti-ed door, or the bags of rubbish filling the Selwyn Street skip, it was clear that art can be both resonant and charmingly low-brow. The row of miniature objects (cans of Double Brown, discarded coffee cups, stick mags) centered on square canvasses along the entrance wall served to lampoon the expectations of the white cube and set the tone for the show’s gritty and playful focus.

The collaborative element was clear as well. The doors and windows hung on the rear wall, the small utility boxes, window frames, walls and replicas of the giant spray cans on Lichfield Street all displayed the artist’s willingness to share the process of creation – Ghostcat’s builds adorned with downsized tags, pieces, throw-ups, stencils, stickers and paste-ups by local artists including Ikarus, Tepid, Dr Suits, Morepork, Teeth Like Screwdrivers, Jessie Rawcliffe, Rubble City, Dcypher and more. Reinforcing Ghostcat’s belief in community, these authentic embellishments, along with the artist’s insistence on hand-crafting, imbue the pieces with a distinct status as unique creations.

Despite the obvious challenge of where to put a scale model of a toilet in your house, the pervasive red dots throughout the exhibition were evidence that this labour of love by a talented local artist struck a chord with a diverse audience. Shadow Town presents a new element in the city’s urban art scene, drawing on the power of urban spaces and harnessing the familiar (of both architecture and art), Ghostcat’s work is worth your attention and inspection. While the enthusiastic crowd undeniably added to the atmosphere and therefore the work on opening night, the contrast of the quiet, clean gallery space with the broken, dirty landscapes adds a certain charm as well and ensures you can truly immerse yourself wandering the streets of Shadow Town.

All photos by Charlie Rose Creative.