Graffiti and street art have evolved into more than just the writing on the wall. Leaving alone the problematic expansion into commissioned work and mural festivals and the questions around authenticity and even gentrification, urban art has long been tied to other realms of expression. Of course, the documentation and discussion of graffiti culture as it emerged in the seventies and eighties by academics, writers and, perhaps most notably, photographers, ensured a symbiotic relationship between the art and these orbiting parties. Alongside these forms of investigation and documentation, filmmakers have had a strong presence (Manfred Kirchheimer’s Stations of the Elevated of 1981 an early ‘graffiti film’). Both outsiders and those deeply entrenched within the culture have explored, expanded and told the stories of graffiti, street art and the artists who now defy catergorisation through moving image. While some films have attempted to expose many to the mysteries of urban art, others have preferred an informed audience and remained stoically more niche. Some have celebrated the superstars, others have used little known figures to reflect upon more intimate, yet accessible themes. As a result, urban art films reach from mainstream popularity (think Exit Through the Gift Shop) to less grandiose platforms like YouTube and Vimeo.

Following on from our ‘Book Club‘ a few weeks ago, we thought this time we would rope in a couple of friends to give us their favourite graffiti and street art films. We asked TOGO and Berst, both figures with their own experience of producing video content, to name the urban art films that have left the biggest mark on them. If you follow TOGO on social media, you will be familiar with his video productions; embracing chaos, exuding a sense of playfulness and yet always with a thoughtful philosophical beat at heart. It is no surprise that his selections also exhibit those traits. Berst’s Real Time series is a growing documentation of Aotearoa graffiti history, and is surely influenced by the films he has consumed. His picks reflect numerous personal revelations that have fed into his own philosophies and understanding of graffiti culture.

So here, in our opinions and in no particular order, are fourteen urban art films you should check out, starting with a few of our own our picks…

Vigilante Vigilante: The Battle for Expression (2011)

Vigilante Vigilante , directed by Max Good (who co-wrote with Julien de Benedictus), tells the story of guerrilla buffers, those figures who exercise a self-imposed mandate to eradicate graffiti from city streets. The central premise is that their silencing of the streets is as ideologically problematic as the art they are removing. While it starts as a sleuth-like investigation into the identity of a mysterious buffer in Berkley, it soon expands to highlight other figures and the story only gets stranger and the characters more bizarre.

When I saw Selina Miles’ documentary about famed photographer Martha Cooper, it was with an audience of people around Cooper’s age. However, as the film began, it became clear that Cooper was not your average 70-something. The film is not strictly urban art-focussed, but Cooper’s role in documenting one of the high eras of graffiti and the decades since has made her a beloved figure in the urban art world. And at its heart, Martha is a love letter to a determined, inspiring artist who refuses to submit to expectation and has no desire to slow down.

Beautiful Losers is another film that isn’t strictly a graffiti or street art film, but in following the scene that emerged out of nineties New York around Alleged Gallery (the film is co-directed by Alleged founder Aaron Rose, with Joshua Leonard), it is tied to the anarchic spirit and influence of urban street culture, and of course features the likes of Steve ‘ESPO’ Powers, Barry McGee and Shepard Fairey. It is whimsical and funny, while also heartfelt, highlighting a time that continues to be so influential upon art and visual culture today.

While Faces, Places, made with iconic Brazilian filmmaker Agnes Varda, won French artist JR more critical accolades, this HBO documentary, directed by Alistair Siddons, about the Inside Out project that won JR the TED Prize in 2011, is personally preferred, covering of one of the most enduring urban art projects of the last decade. It extends from the rioting streets of Paris to the earthquake stricken favelas of Haiti, exposing the community-centric concept of JR’s work.

It’s all or nothing for the wild David Choe and this film, the result of director Harry Kim’s multi-year trailing of the artist, is a case for living unrestrained and defying suppression. It profiles the artist’s life over seven of his most crazy years from big commercial success to a long stint in prison. The film offers a rare insight into an interesting individual who will questionably entice you out of that comfort zone.

A look at ‘famous pranks and acts of activism’, this documentary film directed by Banksy and Jainie D’Cruz, affirms all our unruly behaviour and questionable habits. Artists such as Mark Roberts, who streaks at major international sporting events, and Noel Godin, who throws cream pies at celebrities and politicians, are praised and celebrated in this thought-provoking piece of work. Bad intentions can bring good results. And remember, you can always rely on a golfer for a reaction…

In this short film, abstract artist MOMO travels around Italy in an attempt to paint bad murals. Illegal, fun and free, his aim is to care less about the outcome of the work and more about the experimentation. It’s an enjoyable and amusing film that reminds us to occasionally take a step back in order to move forward.

Nothing makes you want to paint the streets more than watching auction houses sell paintings for squillions of dollars. The Price of Everything delves into the contemporary art world, examining the relationship between creativity and commodification in today’s money-driven society. While the film, directed by Nathaniel Kahn, reveals how absurd the art market really is, it also provides a fascinating look into what makes art valuable.

Yes, it’s commonplace on lists like this, but none would be complete without it. Go watch it again and tell me otherwise.

What can I even say about this documentary that probably every single writer in the world hasn’t already said? It’s a timeless classic. It’s a documentary that captured a beautiful moment in history and gives us some insights into the early contexts of graffiti and hip-hop culture. This is definitely a documentary that I have watched quite a few times and happily watch again. Each time I watch it, I learn something a bit different about the movement. The quotes in this are also really memorable particularly the segments from the likes of Seen (“never mind probation…”), Cap (“Blood wars, buddy…”), Skeme (“You do doodle”), Kase 2 (Yeah, I vandalism alright…”), and Min One (“That’s never forgive action”). 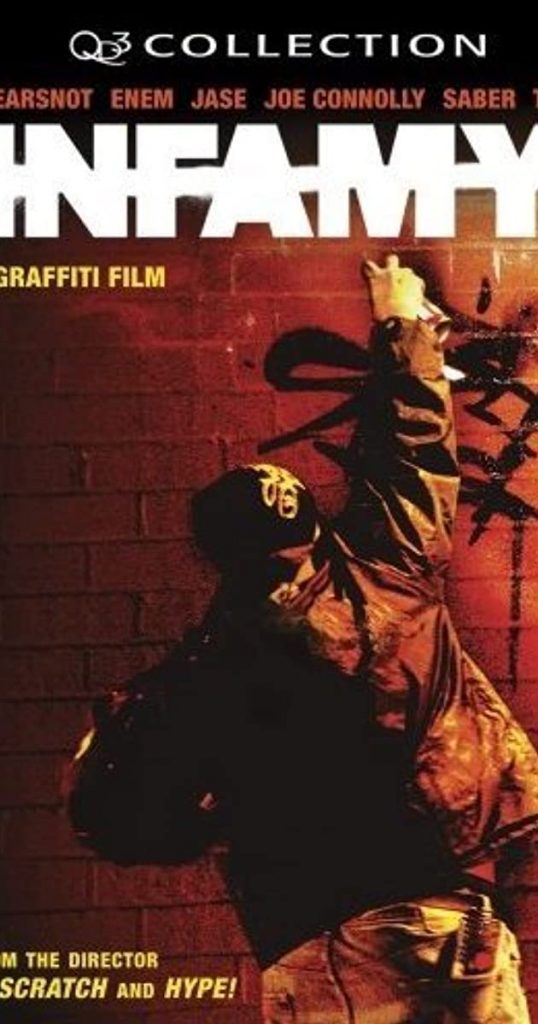 I remember watching this for the first time and being blown away by the individual vignettes of each writer. There was a really good cross section of writers doing different things and for the first time, it gave me an insight into the writers’ lives. During this time, I was only tagging and just being introduced to piecing, so Earsnot is a notable standout with his daylight tagging and stories about racking. I was also particularly drawn to Toomer and Saber’s stories. They are examples of two writers who had dedicated themselves to the game and had made some major sacrifices to get up. There are also so many quotes that came from this documentary that my friends and I still say to each other today.

Piece by Piece: The History of San Francisco Graffiti, Documented (2005)

From memory, Piece by Piece was the first DVD I actually purchased and still have. It was accompanied by a little booklet which profiled a couple of main writers from the San Francisco scene. I read this book so many times during my part-time call centre job. I recall reading the Revok, Norm, Saber, and Reyes profiles many times over. It was the first time I actually got to see a city’s graffiti scene through so many different perspectives because they had interviewed so many people. Piece by Piece introduced me to a lot of ideas about inner city bombing, territory, catching high spots, and productions.

I watched this documentary at my friend’s house. I’m not sure how we got it but GBAK had more or less just formed as a crew and after a house party we went out bombing because we were so hyped. The message of this video was to go all city, and this really planted the idea in our minds of how to get up. It’s also one of the first videos that profiled one singular writer and had so many people vouching for him that it instantly gave him this kind of celebrity status. It was interesting because he also showed his identity but at the same time was also painting trains and bombing illegally on the streets.

The third of three Dirty Handz documentaries, Search and Destroy is definitely the most refined and well put together. The narrator behind the video gets you hooked the moment he starts speaking. It’s almost a video diary of a train writer. Crews like WUFC and SDK lead the way in this video for hardcore train painting in Europe and it is just jam-packed with action. It really showed me what was possible with teamwork and it had a bloody awesome soundtrack as well. It had some hip-hop music but mostly electro and techno vibes which was quite a different to the American representation of graffiti.

That’s our list, what have we missed? let us know…