I recently caught up with Jay ‘Daken’ Skelton in advance of the opening of his new exhibition space 413 Local Gallery, based out of A.J. Creative Glass on Tuam Street. We sat down at Switch Espresso in New Brighton as he took a break from painting a wall in the café (featuring a gnarly giant octopus no less) to give us the low down on his vision for 413 Local, how it came about and what has inspired him in the process. The new space will open on October 4th with a group show of local artists, Hello Christchurch, a celebration of connections to and reflections upon the Garden City…

Jay, you are in the process of opening a new exhibition space, 413 Local Gallery, how did that opportunity come about and what approach will you be taking to shows?

I work with my parents, they own their own business, A.J. Creative Glass, and they came to me about three or four months ago and asked if I wanted to take part of the big showroom at the front of the store and turn it into a gallery space. They know that I have always wanted to do something like this, and like anyone in my position I guess, I jumped at the chance. So, now we are in the process of building walls that will make up this exhibition space and building towards our opening show. As the name suggests, I want people to represent their local, wherever they are from, whatever represents them as a person or as a community, and to show it through their art, whether that’s painting, drawing, sculpture, or any other medium…

Does that mean showing artists whose work explicitly deals in those themes, or encouraging artists to engage in such ideas through the shows the gallery will host?

I think it is a little bit of both. In the beginning, I want the first couple of shows to focus on local artists and to give them a stage to show their work, representing Christchurch obviously. But as we grow I would like to bring in people from other countries or different parts of the country and the work itself doesn’t have to be focused on where they are from, but I feel like any artist who makes art, there is a little bit of them that goes into it, you know what I mean?

That creates an interesting platform, what people or spaces have informed the gallery’s identity, because that idea of community might share a kinship with certain types of galleries, while your own experiences might suggest connections to other ‘art worlds’, particularly the rising kind of urban/low-fi scene that is growing in Christchurch…

There are a couple that come to mind straight off the bat. One is Fiksate obviously, everyone there has been super kind to me, and I’ve been part of shows there with so many different people from so many different backgrounds, it has been inspiring. Also my time at ARA, formerly CPIT, is still important to me, especially the experience of being in a classroom with really diverse classmates, like being one of only three males and the rest of the class were female, as well as the fact that people were all from different countries and backgrounds, that was definitely inspiring in terms of my relationships with people. I think people’s stories impact me a lot, and knowing what makes someone ‘them’ is so important…

You have a graffiti background, and I think you would also pretty proudly fly your ‘pop culture nerd’ flag as well…

Do you think that those interests will influence the type of artists and work you show? I know we all like certain things and gravitate towards them in our expressions, so will your passions inform the identity of 413?

Definitely, but I’m actually looking at this space as a bit of a transformative moment for me. I have always done very bold, very colourful, graffiti, comic book, cartoonish stuff. I want to keep that, or at least keep some elements of that, but also, I want to add some more aspects, to try and bring my graffiti background into a more refined process. So yeah, I’m kind of like a butterfly, you know, I want to try and evolve…

To emerge from your cocoon, wings spread out! (Laughs)

There is a sense that there is much more freedom for artists to engage with a wider array of things. Are there any particular artists who have inspired that desire to evolve? For example, I’m such a fan of Revok and the directions he has gone in over time, from graffiti to process driven abstraction, is there anyone like that who has been an influence?

It’s funny that you say that, because Revok is someone I follow closely on Instagram, because I find it so interesting how far he has taken it, from being such a hardcore graffiti person to pretty much now doing straight up abstract art. Also, Chimp’s show Aliases at Fiksate, the jump that he talked about, how he was just a graffiti guy and now trying to go more into the contemporary area, I found that quite interesting. Off the top of my head though, it’s really hard to name people, there’s are heaps of people who influence me in that way!

So, tell me more about Hello Christchurch, which opens on the 4th of October, who is involved and who are you excited about?

We have thirteen different artists, I think. We’ve got the likes of Porta (Clint Park), Uncle Harold, Josha Holland, Morepork, Louann Sidon, oh, and my dad’s in it! My dad growing up did a lot of art projects, but he never really committed to being an artist. He doesn’t consider himself an artist, but I think he is an artist. There is a whole bunch of people, and I’m looking forward to seeing all of them. They are all going to bring something different and exciting to the table.

The show’s title, and its expression of a connection to place, reflects what you talked about in your vision for the gallery. When you developed the idea for this show, what were you hoping to encourage artists to think about?

Hello Christchurch, it’s an opening, so it’s literally a ‘hello’. I guess I wanted people to look at where they live, and how it makes them happy, to think about the things that they see around and feel about Christchurch and how they put into those things into their art. I told everyone that they could do anything they wanted, use whatever material, as long as it relates back to Christchurch in some way, even if it is the smallest thing, just something that relates to Christchurch and what it means to them. 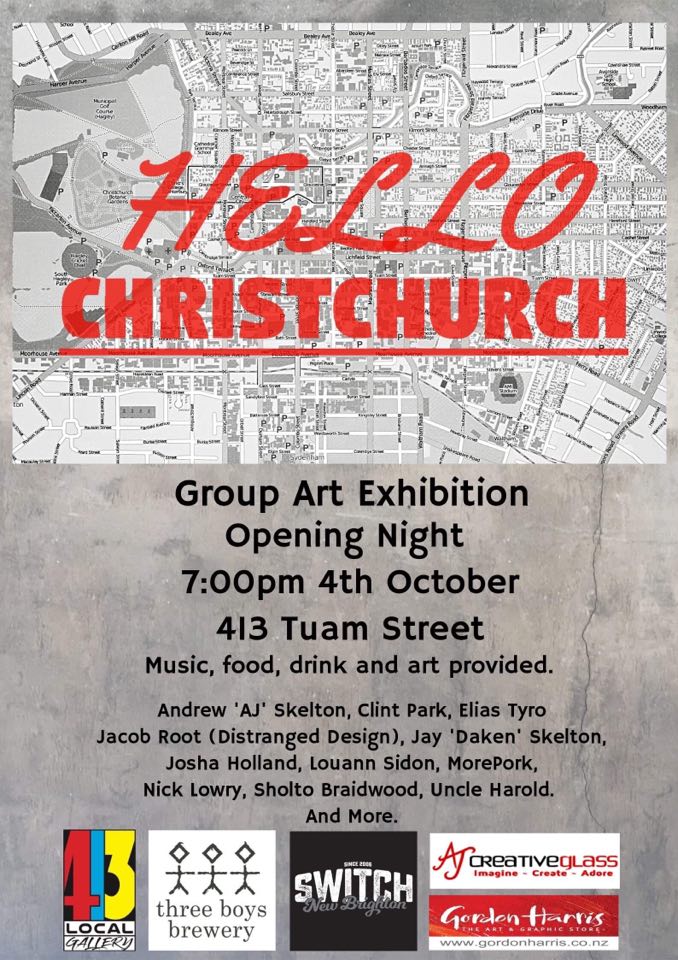 Have you had any previews of work yet?

Funnily enough, no! I have no idea what anyone is doing, except my best friend, who works at A.J. Creative Glass with me and is in the show, and my dad, they have kind of given me a rough idea of what they are doing, but I haven’t actually seen it! The only person’s work that I’ve seen is my own…

You are going to have about three weeks to hang everything from when you get the work, is that right?

What approach will you take to curating the show? A group show means you must honour individual works and give them space, but at the same time try and expose interesting links, even though the artists haven’t necessarily thought about how their work relates to others in the show, especially since you have given them such a broad allowance.

Yeah, I feel like it will be a bit of both really. You want the work to make its own statement, but at the same time it is a group show. But because I haven’t seen any of the work yet, I obviously don’t know how its going to work together. That’s kind of the challenge, it’s kind of the fun for me, finding out how things fit together. Figuring out how people connect, it’s the same thing as making the works connect, but on a visual level, you know what I mean? Colours really affect me a lot, I think about them all the time, so they will definitely affect how I group the work; what colours complement each other, which fight with each other…

I look forward to the show and to the gallery getting up and running and being a new voice in the city. It’s great to see a new space and a new energy, I can only assume you feel excited for the journey to begin…

Definitely, you know being part of the Christchurch art community has always been a really amazing feeling, it has always felt really supportive. I want to make someone else feel that, I want to be the support for someone else, and that I’ve been given the opportunity to do that is beyond awesome. A lot of people don’t get that opportunity, so I plan on making the best of it. I have been struggling at times, it has its ups and downs, but again, it is all part of the fun, it’s part of life!