The Paste-Up Project is a collaboration between Watch This Space, Phantom Billstickers and a selection of Ōtautahi’s finest paste-up and poster artists. With support from the Christchurch City Council, one of Phantom’s Manchester Street bollards has been transformed into a paste-up art installation space for the next 12 months, with local artists commissioned to push their work in new directions with a three-month takeover. The Paste-Up Project bollard serves as a supported platform for one of urban art’s most enduring forms and for the long historical lineage of urban postering (just ask Phantom!), with artists enabled to grow the scale and material qualities of their work within a setting that will challenge the perceptions of an ephemeral form of art.

First up at bat is teethlikescrewdrivers, an easy choice really as he is the driving force behind SlapCity, the loose collective that has embraced the potential of stickers and paste-ups across Ōtautahi. His instantly familar, yet continually beguiling pencil icon has become a recurring feature of the urban landscape. The simplicity of the image opens up a range of potential readings, and yet requires none, it exists, it is, and that is enough. More notable for the Lyttelton artist, is the sense of collaboration and community that his urban art adventures have instituted – from online mash-ups to weekly meet ups to explore the city, teethlikescrewdrivers constantly strives for connections and in doing so has created an expansive network of disparate, yet kindred spirits who see the urban landscape as one of play.

His installation for The Paste-Up Project embraces these ideas, celebrating each in a segmented yet cohesive production that will be on display for the next three months in central Christchurch. Of course, the pencil is the star, refashioned and re-formed across the circular base, and in doing so speaking to the various personalities who have inspired, influenced and embraced the artist’s signature form. But that’s enough from me, let’s hear from teethlikescrewdrivers as he explains his installation…

For the two people who don’t know you already, introduce yourself…

I will admit that there was really no other choice for the first artist up for this project – what was your take when we first discussed the concept?

Initially I was doubtful, mostly of myself! I couldn’t really think of anything other than doing bigger pencils and I wanted to give the space something it deserved. I’m fine with doing more pencils, but it wasn’t really bringing anything new to the table. After a few discussions with people and reading the brief, I started to think more about the possibilities it offered someone who usually only does one thing. 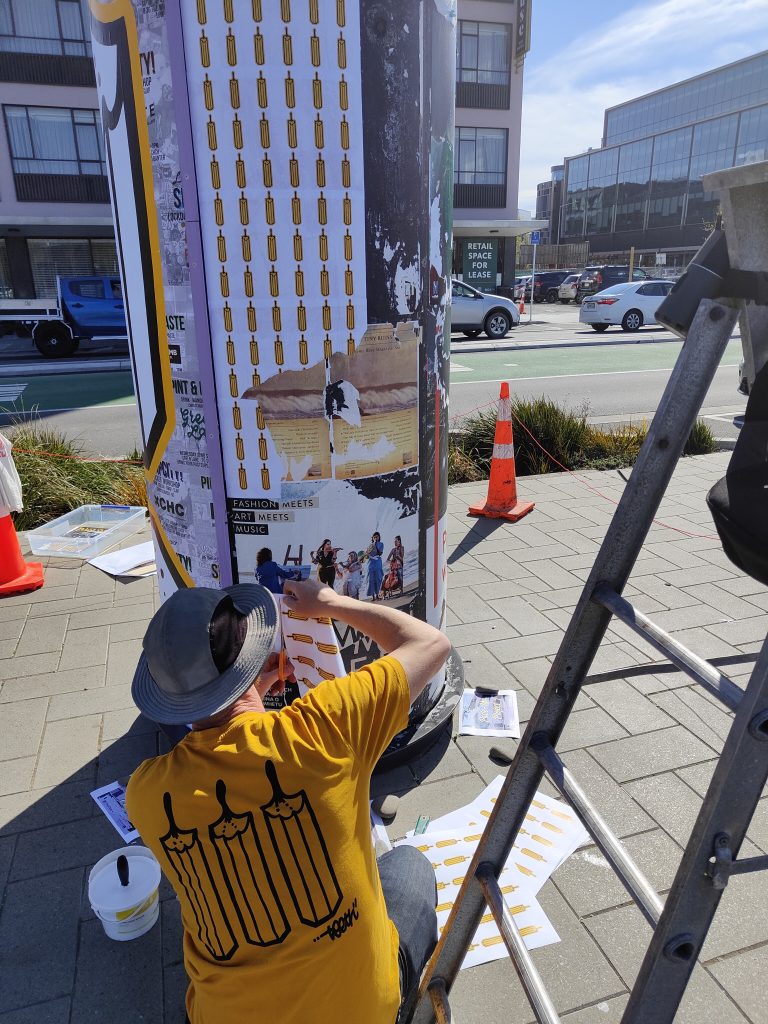 It is a surprisingly big space, how did you come up with the concept to fill the bollard and what incarnations did you go through?

I was going to just use it as one giant nine metre-squared canvas. After a few visits with a tape measure and some really basic planning, I decided to divide it into small, medium and large ‘panels’. This then made me start thinking about three themes. It kind of rolled on from there.

Your piece is titled Community, Collaboration and Connection, and it reflects the various elements that form such integral components of your experience in the world of urban art, how does each section relate?

After I settled on three panels, the themes were easy. I wanted to highlight paste-ups as a medium and have the chance to play around with that, I wanted to introduce more of the international sticker and paste-up community to Christchurch and I was always going to give our SlapCity family some love. I had to measure up pretty accurately for the community one, just so the pencil slotted in. The collaboration panel used the Vermin poster (Vermin is an artist from Manchester in the UK) as a starting point and then I just filled in the space like a sticker bomb. The big connection wall I had a rough idea for…kinda . I figured if I turned up with all the stuff I had, made and cut pastes on the spot and used posters salvaged from clearing the bollard something would happen. I just started throwing up stuff and discovering gems! 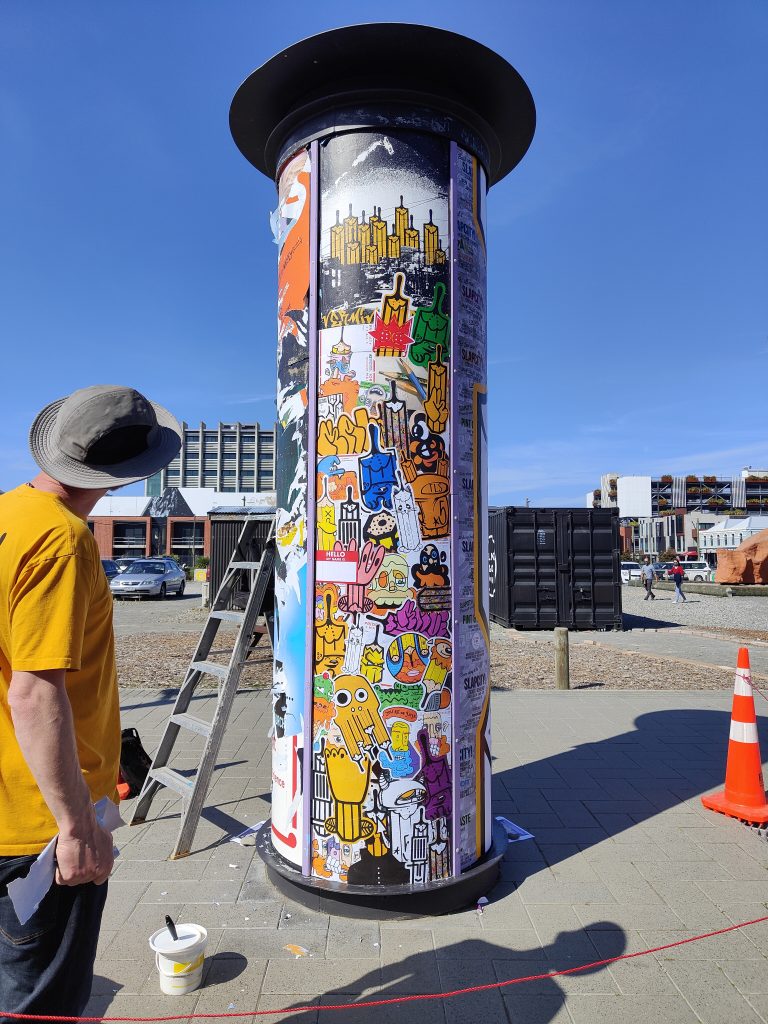 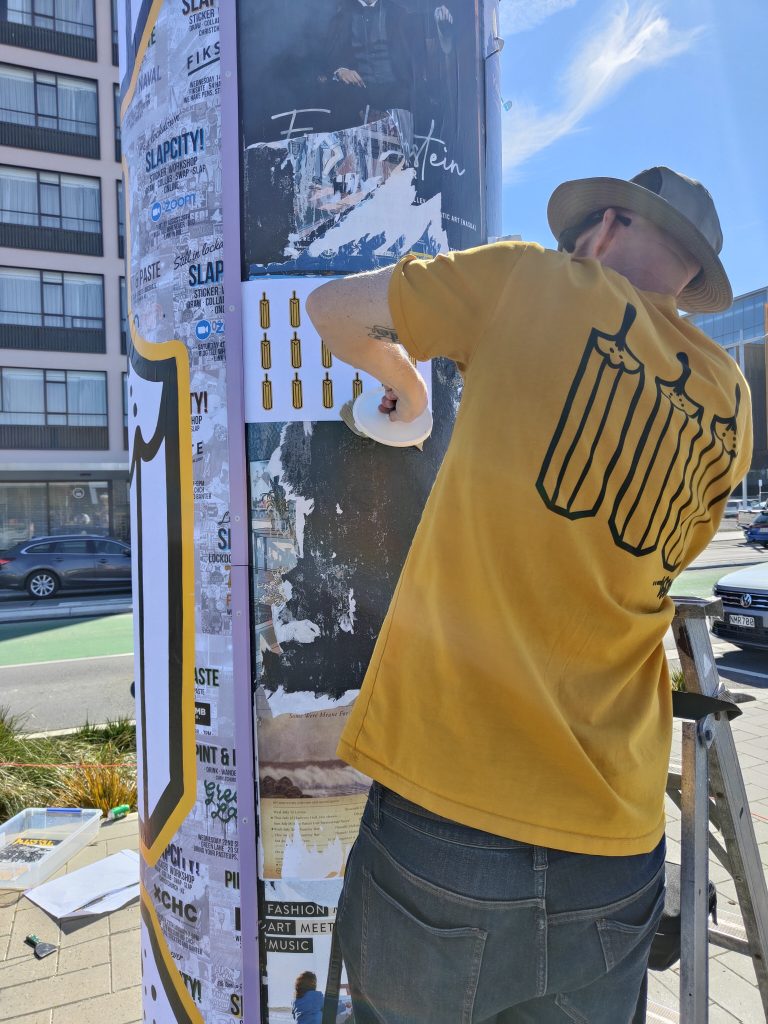 You got to play around with some cool material concepts, from large scale pastes to smaller overlapped pieces and of course the tearing away of layers, tell me more about each of these ideas…

Firstly the  bollard is bloody ginormous, so I knew making three-metre tall pencil was going to be a struggle and would basically cover a whole panel. By splitting it I was able to physically manage it and still give a chance for the stuff behind to be seen. On the connection wall I really got to play with all the layers; negative spaces and using cool materials such as the old posters and wallpaper. On the second day I came back and started tearing into the layers from the day before, I really enjoyed that element of the process. I also really liked making my own wallpaper and giving the whole thing depth. 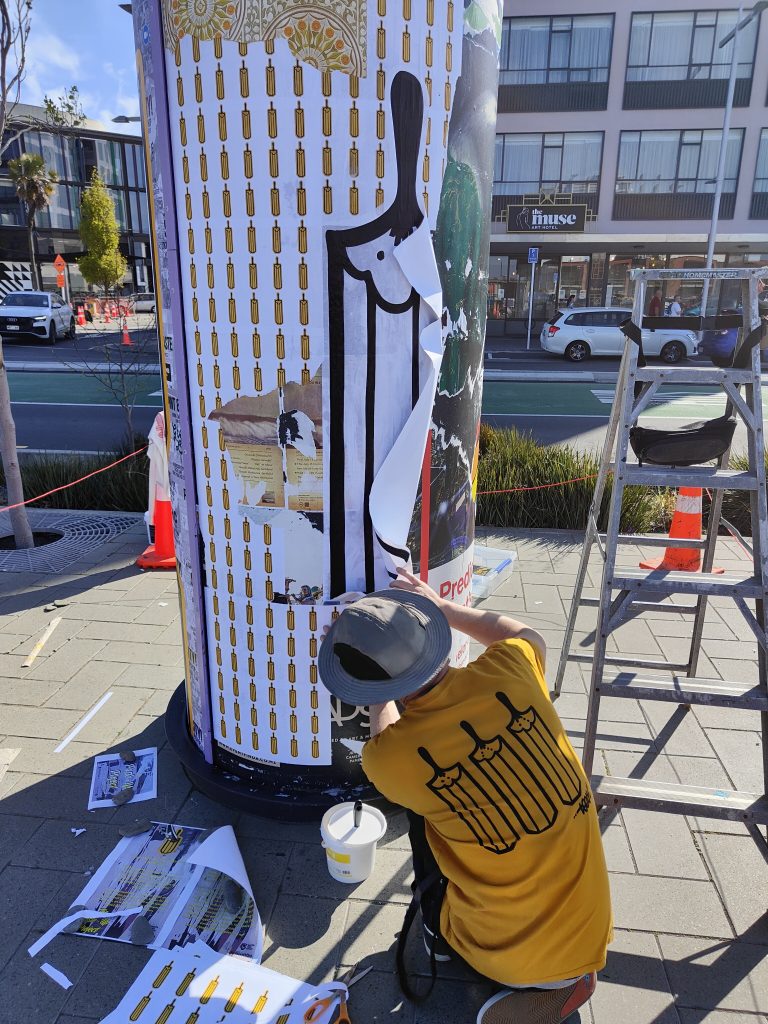 You spent a sunny weekend on the bollard, what was it like to have the time to explore the ideas you had developed – it must have been a new experience compared to the missions with friends. Did you find it still quite communal? I imagine it was like a mural painter – do you have any interesting stories of people stopping to chat or asking questions about what you were doing?

I kind of set up camp for the weekend, it was ace. I had a picnic table for drawing and cutting paste-ups, a speaker playing music, my car right there and my shit spread out all over the place. It was ideal! I had lots of good chats with passers-by about the bollard and my car; both great conversation starters. Having the time to step back really helped the big panel come together. That one is more artistic, I guess, it’s less about one piece and more about layers and how they fit together so time helped.

Oh, I almost got signed up to the Peninsula Trampers Club by one old fella who I had a good chat with! Did you know there are a whole bunch of boulders like the ones at Moeraki, but in the streams inland!? You do now!

My whanau popped by and I had a lunchtime beer with a bunch of mates and lots of people came and hung out. It was like a paste-up Glastonbury!

What were some of the challenges you faced? It is obviously not a traditional flat surface…

The wind and the physical size of the paste-ups were the big ones. But because I had time I was able to leave stuff and come back to it, or think my way around it. 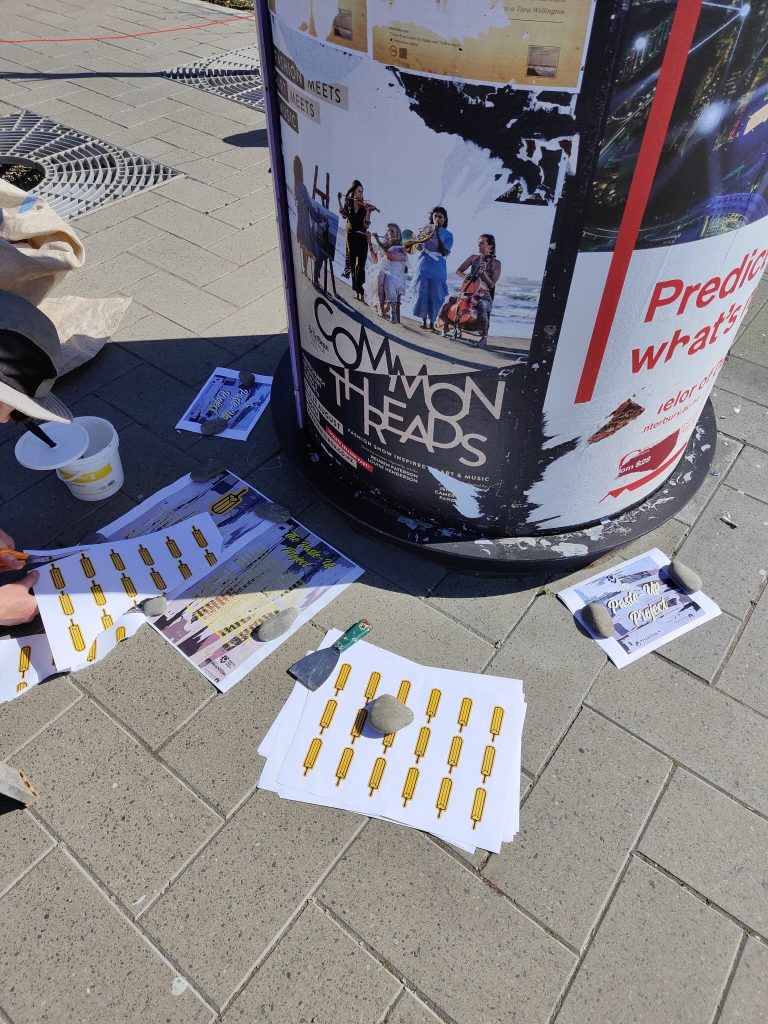 What are your hopes for The Paste-Up Project, not just in terms of your own installation but as a concept? Do you see it as a way to change perceptions, or at least the visibility of paper art in Ōtautahi?

I hope it opens the door for more artists to get their stuff up. There is a real delight in putting your work up in the streets rather than in a frame or on Instagram. Having a dedicated paste-up ‘show’ really lets people see some of the more established artists’ work and hopefully inspires others to get out there into the streets with a bucket and brush or just a pocket full of homemade stickers. Down the line I would love to see this kind of collaboration move into different towns and cities. 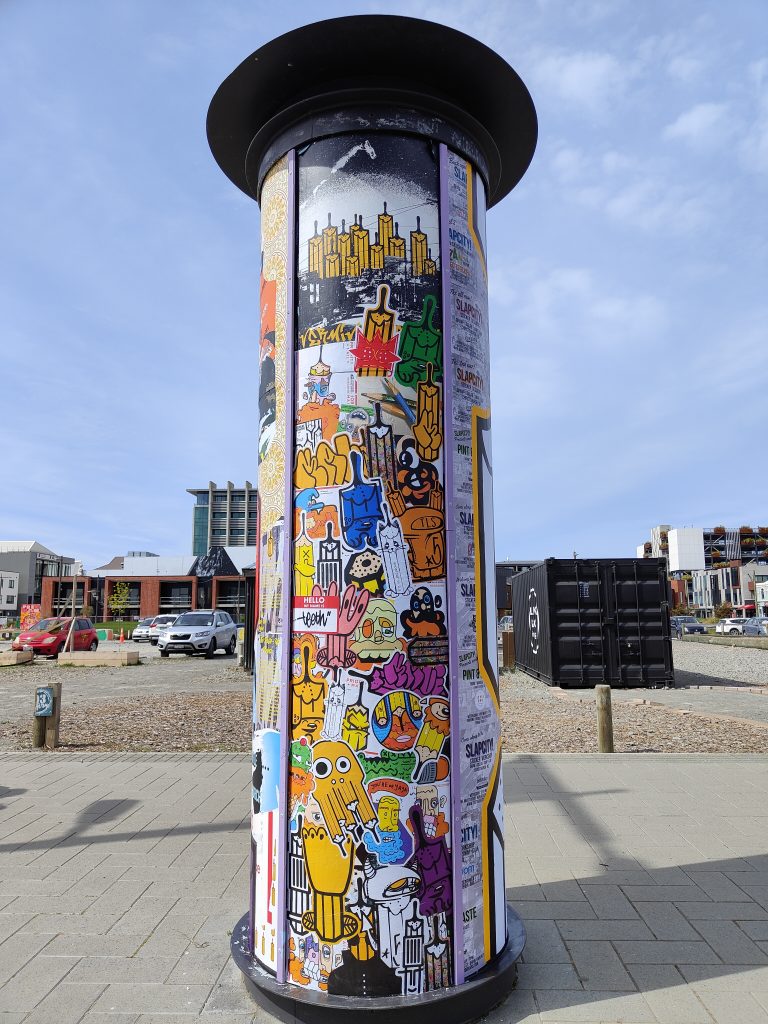 You have developed a web of connections around the world with artists through collabs and trades, and many are featured on the bollard, have you had any responses from those people overseas yet? What have the responses been like from the local scene?

Instantly! The collab wall was really just a huge collab and mash-up sticker bomb and everyone is always stoked to see a bit of their work in one, especially way down here in Christchurch. I think there are mash-ups and collabs with over 50 artists on that panel; everywhere from Brazil, Russia, most of Europe and even just down the road.

I’ve had comments from people about how well my pencil scales up, this was a good test for that! I was really stoked with the Vermin collab, it looks epic as a huge poster and you can really appreciate all the details. I was also really pleased to get work up in New Zealand from good friends from overseas. 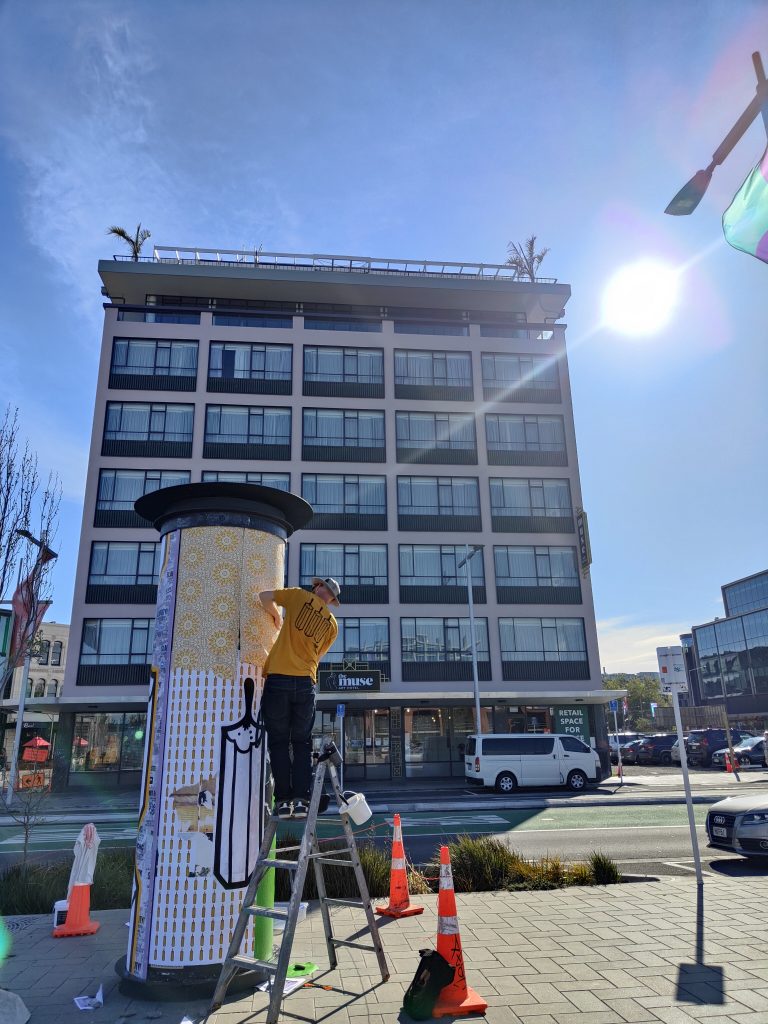 Do you hope this is just the start of more opportunities like this, and if so, do you have any ideas of how it might be harnessed?

While the weather was perfect for installation, it rained heavily just a day later, what impact did that have and were you philosophical about it?

I think putting a layer of straight-up PVA onto wet paste last thing was a double-edged sword. The next day the whole thing was covered in white streaks and all the paper was still really wet, I thought I’d knackered it! But after a while it dried clear and I think will add a bit more protection in the long run. The good thing about all paste-ups is you can always add more layers. If it all falls to bits over the next few months I will just go and tear a bunch off and add more. 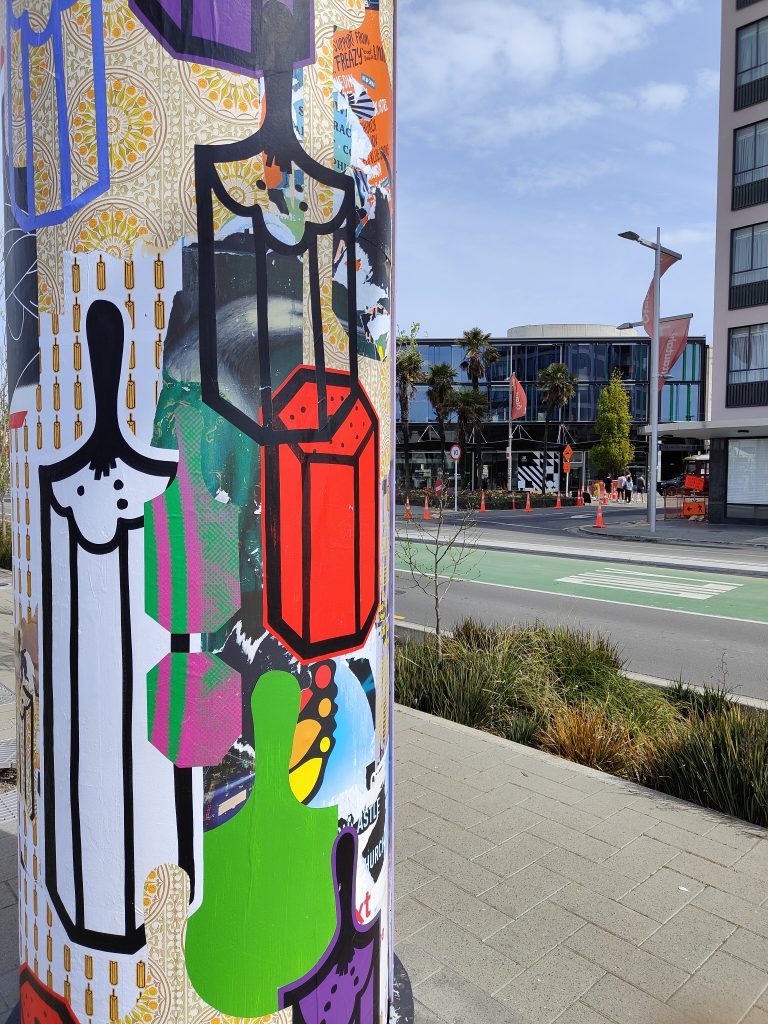 Who do you want to shout out?

Watch This Space, Phantom, the Christchurch City Council, the SlapCity family and all the amazing venues that have let us use their spaces over the past two years. All the artists here in Christchurch who paved the way and have got us to a point where a project like this can even happen. My whanau and all the rad artists who have let me use their art for mashups or who have taken my pencils and messed with them.

Follow teethlikescrewdrivers to see what he gets up to next, and keep your eyes and ears peeled for more about The Paste-Up Project on our channels!

Oh, and get down to the site on Manchester Street to see this amazing installation in the flesh!